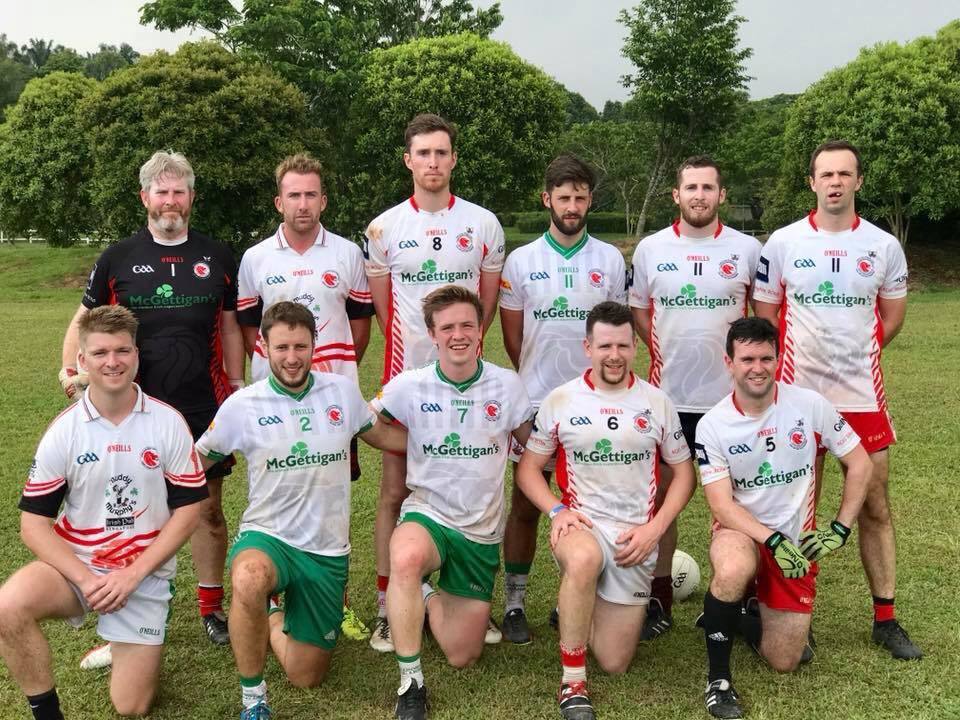 Most people do not throw around the term ‘soul building cultural experience’ often these days, particularly when referring to the Singapore Gaelic Lions men’s teams on tour, and nor should they given the individuals on display in the ghetto of Singapore, Malaysia’s Johor Bahru on this past Saturday. Derek ‘dad bod’ Cahill led a rampaging storm of fragile ang mo to the west of Singapore and over the straight, however if Alan Keogh’s plan to delay the bus long enough to cancel the tournament had of come to fruition, we might have seen Ginty, Cahill and the Hatch getting caned for murdering the bald bandana wearing facebook stalking veteran, which may have still resulted in a decent day’s entertainment.

With the bus departing before 7am filled with tired souls, the sounds of Brian O’Reilly’s confidence surprised and bewildered many around him, ensuring all were awake in time for what was in all fairness the swiftest football team immigration process in history. Another stern reminder to make sure we all had our ‘fookin EP cards with us’ gave everyone the positive energy required to step out of the bus only 30min late and ready to do battle.
The grounds were moist, the air dengueish and the sun ready to fry Luke’s ghost like skin.
At about 9am Ryan started his stretching, and by about 3pm was ready to go. Sam thought that if only he wore Petesy’s shoes he might also be talented enough to be able to talk shite to Mike Barry all day, instead finding himself throughout the day kicking no less than 127 goals according to him.

The games began. Much as the day had begun, with lethargic kicks, slippery ball handling and non-stop BS from Aaron ‘I don’t shave my chest’ McCallum. As if understanding which team you were on wasn’t mind bendingly hard enough, the committee decided that they would further disorientate the organisers, Singapore C became Singapore B and Singapore B became the butt of most jokes due to their choice of hobo styled kit. Thailand, JB, KL and Vietnam all in attendance, most of the morning was spent trying to remember the name of that lad from the other club who you did pills with in Shanghai 12 months earlier or hoping that lass Ryan should have ridden last year but probably didn’t would turn up and give Daithi a pity bang.

A few strong starts from the Lions meant there was a high chance of the most unpredictable of outcomes, an SGL v SGL final in the works.
Notable mentions early on was The Gooch who managed to not get on anyone’s shoulders, take his shirt off or pass out before lunch.
Luke decided that refereeing and playing was fine and basically did whatever he wanted as per usual including avoiding any warmups and expressing a disdain for any form of authority or personal hygiene. Gareth disappointed in the lack of glory as a goal keeper went on to run for 4hrs and not score on or off the pitch as his bar staff were not able to make the event.

Lunch was a formal affair getting a 4 star review on yelp from The Blade who after his 4th helping of the Norwegian Salmon was ready to settle in for an afternoon marred by missed opportunities and finger pointing for excuses.
Mike Barry thought he could shoot like Liam from 75m out for a second and fired a shot off that went so wide it was back at the Tuas checkpoint, as Petesy screamed ‘Noooo’ like he was over acting in an action film, which Mike thought was really helpful and let Peter know it was appreciated.
Then came the man of the tournament, Tom ‘friendzone’ Kennedy with possibly the hardest, fastest, hairiest ball into the back of the net seen in SGL history, grazing heads and egos as it went.

Hooley led his team of autistic squirrels into battle for the under 60s junior final in thrilling fashion coming back from 8 points behind to win by basically enlisting Enda to out smile the opposition despite Fionn’s best attempts to throw the match with his goalkeeping.

Some other non-SGL teams played each other with minimal crowd support from the Lions as they prepared to do battle in the Men’s Senior final. Both teams were instructed to play dirty and with the rain arriving this was not an issue. Conor in tears early on meant the standard was set and Dom took it in turns to injure all potential future teammates for the good of nothing more than reinforcing his withering manhood. A controversial finish ensured plenty of discussions to be had later over a cold beer.

Awards out of the way, the party started and took us to a JB bar where the pool table saw plenty of rivalries established and shots shared. A disabled toilet encounter left some with that wasted Liam McGinley thousand yard stare who ironically did not get his stare on due to a mental disability that left him unable to drink more than one shot in an evening.

The event had come to an end for most. The usual items then ticked off… bus trip back a blur, trophies lost, Buttimer annoying as fuck, McGettigans took another 10k sgd in pint fees off the tired lads and called it a day.