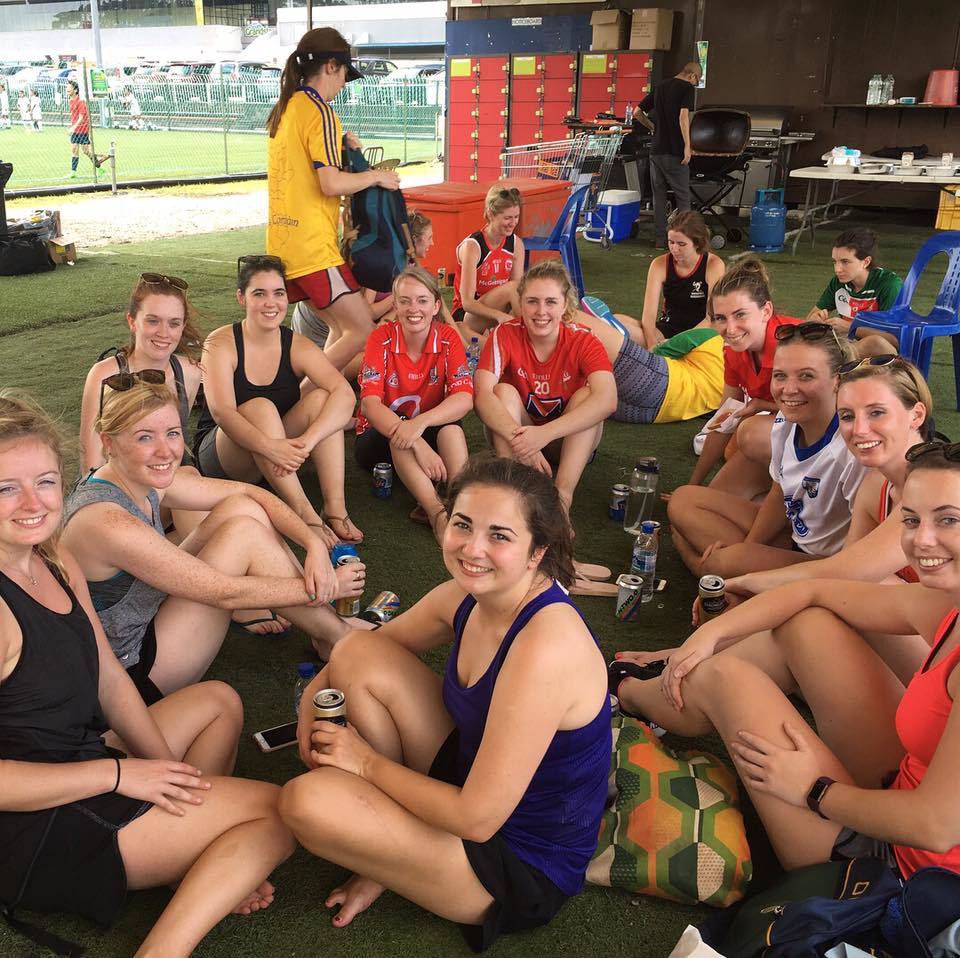 Published: over 2 years ago

Up before the crack of dawn we set off from Changi airport, with everyone miraculously making it for our early morning 7am flight to KL. Having lived up to her promise from the previous week, Jenny ‘our star’ arrived to the gate with her homemade bread sandwiches in hand, ready to feed our army of players. Up up and away we flew to KL, which in turn would be an exceptionally ‘fashionably late’ arrival to the pitch.

Drama ensued at the immigration line as passengers popped over and back between each queue hoping to make it out of the aiport amongst the masses of travellers. I think we may have mentioned how annoyed we were about the queue ‘once or twice’ over the two hour wait. Aoife Ryan even suggested she might take up your man’s role behind the immigration booth to speed the process along with her “fluent Malay”, while Cliodhna offered to take out an OAP queue skipper (Up the Deise!). Sure are we well lads?

By god, at that stage poor PC’s blood pressure was rising rapidly but thankfully kept at bay by the glimpse of the final two dazzling members of our squad striding towards us from immigration. Success…..Yeoww! With another small little hiccup with our bus driver we were well on our way, just a shy wee 2 hours later.

Our nerves were shook knowing well we had back to back matches to play. However it didnt dampen our spirits! With an hour bus journey ahead PC managed to fit in several supportive speeches. The craic squad were raring to go, with all eyes on the prize.

With the sun beaming down we sprinted onto the pitch towards the matches with a warm welcome from all the ladies teams.

After a quick warm up and rousing words of support from Aoife Murphy ‘”No cant’s just bags of cans” (merchandise pending)… it was on to the main event! The craic squad had their work cut out for them taking on the Saigon Gaels, Orang Eire KL, Asian All Stars (Hong Kong heavily subsidised with KL) and finally Bangkok.
The team went from strength to strength as everyone started to get the hang of this whole football thing. Jen Samuels was stellar in goals, putting her body on the line and earning herself a fat lip in the process. Captain Fantastic Kylie was leading from the midfield and took charge of every game. Ciara Hagan was threatening up front, kicking point after point and scoring goals like a natural.
Unfortunately, the other teams were stronger on the day leaving Singapore to lose the last game by 1 point to the overall winners Bangkok. All teams showed great fighting spirit and the craic squad will come back fighting hard at the AGGs!

Given that our cubs were still playing on the pitch beside us, we wanted to rally our support and enjoy some well deserved ‘light pitch side beers’ after a tough day.

Knowing well PC was keen to fly back to Singapore within a matter of hours, we wanted to rally down to the pub as soon as possible. With a quick change we were down in the pub and ready to start again within the hour. We were quickly adopted by some Aussie football supporters with endless chants of ”Hon The tigers” and ”caaaan you believe it?! 37 years!!” All of us readily becoming experts in a sport we know little to nothing about. The discovery of the live music and free drinks down the road in sutraaaa was all it took..from sunset until the early morning the party carried on…

We would like to extend our thanks to Orang Eire KL for hosting us at the weekend. Great hospitality all round. A massive thank you to PC for supporting us for the weekend (and putting up with us haha) and lets not forget our captain Kylie who helped with some fierce organising. Great experience for all. We are raring to go for round 2 in the AGG’s.

“Once a lion, always a lion”