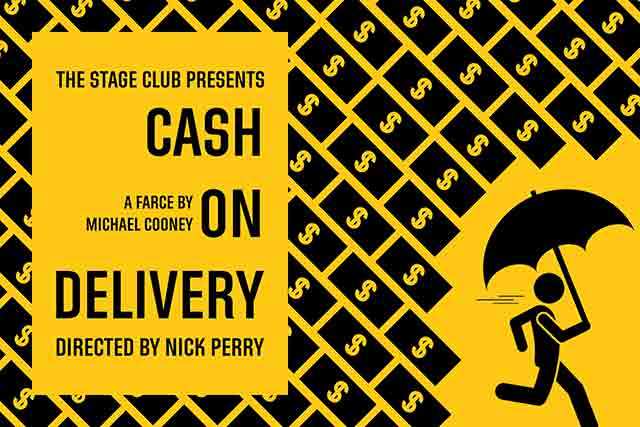 SGL's own Conor Walsh is continuing his stage career with Michael Cooney’s 1996 comedy Cash on Delivery.

Discount code of 10% off for SGL members : MONEYMONEY.

Check out the details below:

The Stage Club will kick off its 2019 season with a production of celebrated British playwright Michael Cooney’s 1996 comedy Cash on Delivery, directed by Artistic Director Nick Perry and produced by Club President Loh An Lin. The production is slated to run from 20th February to 23rd February at KC Arts Centre, 20 Merbau Road.

Cash on Delivery revolves around the excesses of a welfare state that is out of control, with the central beneficiary, Eric Swan, deluged with money from all sorts of bizarre claims that he has creatively contrived. That is until an inspector from the Department of Health and Social Security arrives, prompting his belated attempts to put things right, while everything begins to rapidly  unravel… with catastrophic and hilarious results.

Full of cracking one-liners, physical gags, bizarre misunderstandings, and a relentless pace, Cash on Delivery delivers laugh after laugh. Written by Michael Cooney, it is a farce in the classic British tradition (See Brexit). It soars higher than Boeing, Boeing.

“After the success of musical Cabaret, the debut of the original work Rank Outsiders, and the Club’s traditional pantomime, the Club once again returns to one of Singapore’s favourite genres - the classic British farce,” says President Loh An Lin, “Amidst the unstable global conditions in current times, we need comedy and laughter more than ever in this world we live in. Cash on Delivery is a timely exploration of the idea of a welfare state without losing the entertaining sheen that audiences from all walks of life are sure to enjoy.”

Critical Accolades for Cash on Delivery

“This superb farce…I found myself snorting like a demented whale. It strikes me as being an instant classic of the genre.” - Daily Telegraph

“This play is a consistent smash wherever it plays. It’s one of the funniest farces I’ve seen in a long time.  Period. 5 out of 5 stars.” - Critics Pick

About The Stage Club

Founded in 1945, The Stage Club is Singapore’s oldest theatre company. A non-profit community theatre, the Club is open to all and provides rewarding experiences on-stage, off-stage, pre-production, post-production, and just plain social.

Student tickets are more than 50% off regular price, with 1 free ticket for every bulk order of 20.