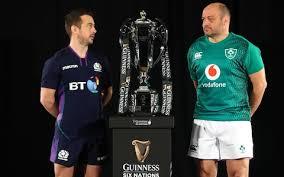 Published: about 1 year ago

THE 2019 Six Nations continues with Round 2 as Scotland face defending champions Ireland at the BT Murrayfield Stadium in Edinburgh on Saturday 9th February.

This a big game with fellow Rugby World Cup Pool A competitors. Ireland need a seriously improved performance from last weeks showing ( or no showing )

Ireland's Devin Toner and Garry Ringrose are out of Saturday's Six Nations game with Scotland.

The pair have not recovered from injuries sustained during the 32-20 defeat by England, although wing Keith Earls is likely to be fit.

In Toner's absence either Quinn Roux or Ultan Dillane will partner James Ryan at lock while Munster's Billy Holland has been added to the squad.

Come down to Muddys and show your support on Saturday night! Usual table on the Subway side for SGL. Kick Off at 10:15