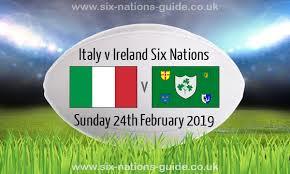 Italy will take on defending champions Ireland at the Stadio Olimpico in Rome on Sunday 24th February, during the third round of the 2019 Six Nations Championship.

Ireland beat Italy twice in 2018; firstly winning 56-19 during the Six Nations at the start of the year, and then winning 54-17 during the Autumn Internationals.

Ireland and Italy have contested a total of 29 rugby test matches since their first meeting in 1988. Ireland have won 25 of those matches, whilst Italy have won four matches.

Come down to Muddys and show your support on Sunday night! Usual table on the Subway side for SGL. Kick Off at 11:00pm

Tables are booked for the Saturday night games