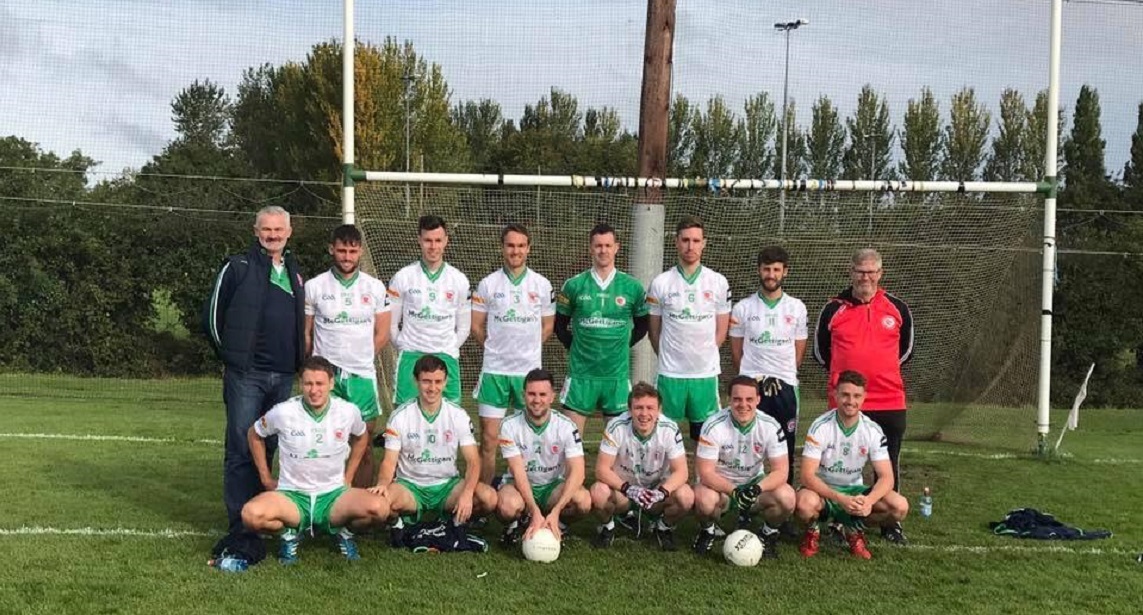 Published: about 5 years ago

Day 1: Southside DCU and Veloute for the Boys in Green

Who knew that outside of the renegade village of Dalkey there were GAA pitches on the Southside of Dublin?

Well there are……..loads of them in fact, although they are usually used as parking spaces for the croquette soirees of those of the landed gentry still calling themselves Palers. Not today, not when the mighty SGL are in town, today they would be put to the use that the Lord himself had foreseen when he invented grass: G…A….A.

James D-vane dropped in from his personalised chopper fresh off the catwalks of Milan yet still managed to come later than the Northsiders who took a good hour to find the pitch. On a windswept afternoon in plastic DCU everyone bar Handsome Mike Barry (who in fairness left his bride at the altar to make the tournament) was down for a light session of point taking and Petesy stretching his hamstring doing overheads. The highlight was the side-line challenge where Liam led by example and made the best use of the wind putting his effort sweetly into the net.

A serious lack of taxis due to Southsiders penchant for chauffeur driven limos resulted in Stevie Moran leading a sponsored walk to town. We eventually found ourselves at dinner in Locks where the veloute was only bettered by the offer from the lovely waitress to finish off Ryano. Mikey Barry and Daithi’s disappointment at the portion size of the starters resulted in them ordering enough beef to keep Larry Goodman in Charvet shirts for the next decade while the selectors helped themselves to some complimentary beers much to Butters dismay.

Post dinner the squad retired to the team base on D’Olier St for an early night while the selectors huddled around some mojitos strategically planning the day ahead. With the fused mint and rum encouraging such creative ideas such as ‘taking our points and the goals will come’, ´each match likely to be a game of two halves’ and ‘those that score more tend to win’ we were set-up for certain victory.

Day 2: St Judes why have you forsaken us

The 9am meet-up time was taken liberally in certain quarters but eventually the squad was togged and warmed up ready to take on St Eugenes of Tyrone. A tight game saw our boys come out on top by a single score (1-8 to 1-7) with respect shown all round. A great start to the day.

Game 2 followed quick and fast. Due to Clonmore Harps dropping out at the last minute when they caught sight of Aaron’s biceps a team from the host’s Judes were valiantly formed as a replacement. They were no match for the mighty Lions though and despite Buttsy’s anger at been kept away from the free beers the previous evening resulting in a black card, the game was won comfortably 3-4 to no-score. Two from two and word was spreading amongst the locals about galloping colossuses from the mysterious East speaking in their indecipherable foreign tongue (which sounded strangely like it originated in West Clare).

In the final group game there would again be a team from the North. O’Dwyers of Fermanagh would be asked to do the impossible and tame the Lions. A rousing man marking job by Daithi on the current Fermanagh captain coupled with some fine score taking resulted in an excellent 2-7 to 1-5 win. The lads had topped the group with great football and an even better attitude. Onto the knock-out stages but first to replenish the energy levels with a fine spread put on by the hosts.

Plenty of tea was drunk and after a quick check with the GDEA (GAA Drug Enforcement Agency) that Udder Mint was not a banned substance the boys were back out warming up for the quarter finals. The weather had taken a turn for the worse and while those that had the presence of mind to wear a rain jacket were dry some others who will remain nameless like Derek Cahill suffered (“its Ireland sure why would we need raincoats”).

Kilcullen (we all dream of a team of Endas) would be the opponents and after their destruction of the opposition in their first qualifier our boys were going to have to put in a big effort to overcome the lads from Kildare. Cometh the hour, cometh the man and when a big performance was needed up stepped the chairman who scored a cracking goal and then made an even better goal-bound save. We doff our St Pauli caps to you Mssr Barry. It was by far not a one man show however with everyone playing their part in a great victory.

The lads had made history – the first team in the 5000 years of Asian civilisation to feature in an All-Ireland football semi-final! The initial following of friends and family had swelled to epic proportions while social media was going into meltdown as Derek updated the global fan base on the progress of Lions. The SGL were bigger than Jesus…..and Swordsy had the wounds to prove it!

Ardagh lay in wait and all that was between the SGL and an All-Ireland final. Little was known about the lads from Mayo although they had dealt comfortably with what had been put in front of them thus far in the competition. We soon found out that these lads were taking no prisoners as plenty of black card challenges were let go by the man in the middle as the Mayo men tried with all the dark arts to stop the Lions. The robust style of play did eventually catch-up with Ardagh when they were a man down within the first 4 minutes.

So with a man extra the odds seemed to be stacked in our favour. However, little did we know that we had a future Mayo senior star to deal with. A 20yr old O’Shea heir in waiting James Carr (No.30 in the Mayo senior panel the following day) was the Ardagh main man and once he got going not even Pistol Pete could catch him. Aside from their superstar the composure of Ardagh on the ball while under pressure was impressive and they eventually came out 2pt victors 1-6 to 1-4.

So the dream of silverware was over but the lads would leave with their heads held high the respect of both players and spectators alike won through the quality of their football, their tremendous attitude and how well they looked in their skinny trackie bottoms. The memories will live longer than any medals ever would…..at least longer than the shite medals Joe Trolan gets made in his North Korean sweat shop.

Player of the tournament has to go to Mikey Barry. Notables were the other eleven as everyone played their part in a consummate team performance. Special mention has to go to Stevie ‘Kevin’ Moran who in the best tradition of the original Big Kev showed that when the soccer ballers realise that kicking over the cross bar counts there’s no stopping them!

The post tournament celebrations lasted long into the wee hours of Sunday morning. SGLers past and present congregated in the Gingerman where stories of the battles won and lost on the rocky road to St Judes were told and retold. The weekend was topped off when the Super Dubs ended their 52-week drought for Sam with victory over a brilliant Mayo team who left nothing on the table.

However, the Dubs were left in the shadows as word spread through Croke Park that the SGL were still in town. Celebrities such as Joe Brolly, Jeff Stelling and Chris Kamara queued for hours to catch a glimpse of their heroes.

So where do we go from here? A likely invitation to represent Asia in the full All Ireland Senior championship cannot be far off. Rumours of Udder Mint breaking global sponsorship records to sign-up Petsy and Calvin Klein releasing a range of D-vane skinny jeans continue to do the rounds.

One thing is for certain however – this will not be the last the world of GAA sees of the Singapore Gaelic Lions.